I love a dinner party. But the ones I’ve hosted or attended have been maybe eight people, maximum. So I was intrigued when I attended The Irish Heather and Shebeen Whisk(e)y House‘s ‘long table dinner’ for Ardbeg Distillery a couple weeks ago. It was me, the Brit, and about 30-ish other people. Long table = a MUST!

We were all there to eat a tasty porchetta dinner and have Ardbeg National Brand Ambassador, Ruaraidh (pronounced Rory) MacIntyre, walk us through our Islay whisky flight and introduce us to Ardbeg’s new release: An Oa.

Islay whisky is the kind of Scotch that made me actually LIKE it. After trying different (and for me) nose wrinkle inducing Scotches over the years, my first trip to Edinburgh (2010) led me – well, I was basically dragged – to a shop on the Royal Mile where a staff member was determined to help me find my gateway whisky. Turns out I like smoky, peaty Islay whisky; which perplexed everyone in the shop. While my gateway whisky wasn’t an Ardbeg – it was another kind that I’ll talk about another day! – it was fun to find something that I liked.

Shebeen is the Ardbeg Embassy for Canada, which makes them privy to some special releases, so I was excited that we were getting to try the easiest to pronounce, but most difficult to obtain: Kelpie. One of my colleagues is Scottish and he has been raving about it. More on that in a moment.

I would be remiss if I didn’t mention the food. Dinner was a scrumptious porchetta and mash dish that melted in my mouth (I’ll never be able to be a vegetarian…). Dessert was a rich chocolate mousse with whipping cream topped with orange zest – because the original topping was strawberries that I am very allergic to! – and what I believe were elderflowers. One word: delicious.

Back to the Scotch. Thirty-plus people make inevitable amount noise, especially when (at least) one whisky cocktail in (recipe is below!), so it was difficult to hear Ruaraidh at times (I possibly went “shhh”  one or two times, but as politely as I could…), but I  learned a couple things, including how to at least passably pronounce the tongue twister name of whisky #3…

Fun Fact: The angels’ share is (per Whisky Magazine) the amount of alcohol which evaporates from the casks during maturation. This can be around 2% per year but much higher in hotter countries such as America. Personally, I like the image of a cheeky cherub doing a taste test.

Ruaraidh’s first bit of advice for tasting was to warm up the whisky by cupping the rim and bowl of the glass. He then suggested we dip a finger in the whisky and then rub the drop between our hands like you would do with perfume on your wrists. These were both eye (or nose) opening exercises because the scent was much stronger than in the glass. The rest is the same: tilt to the light, swirl, sniff, taste and enjoy! 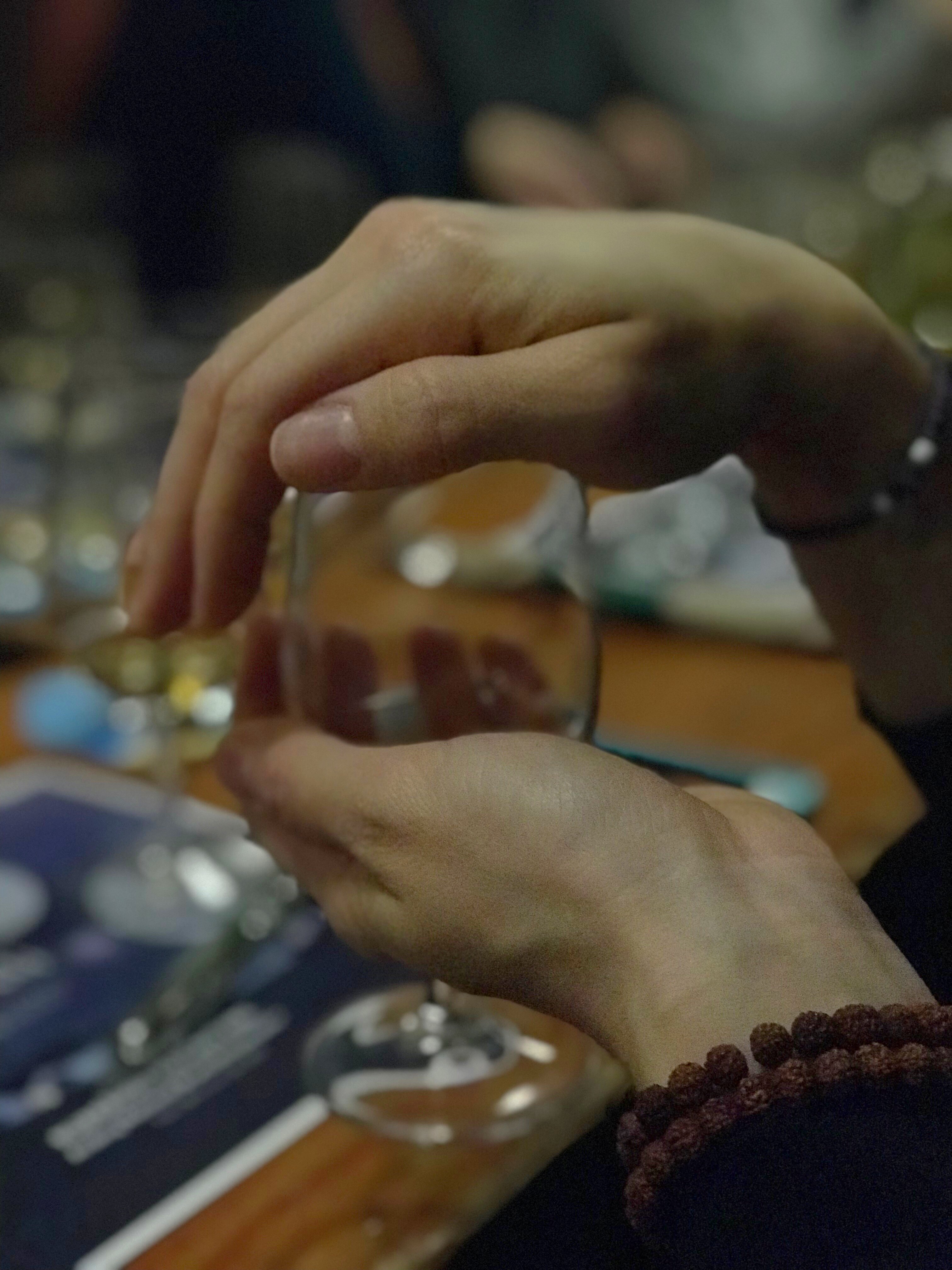 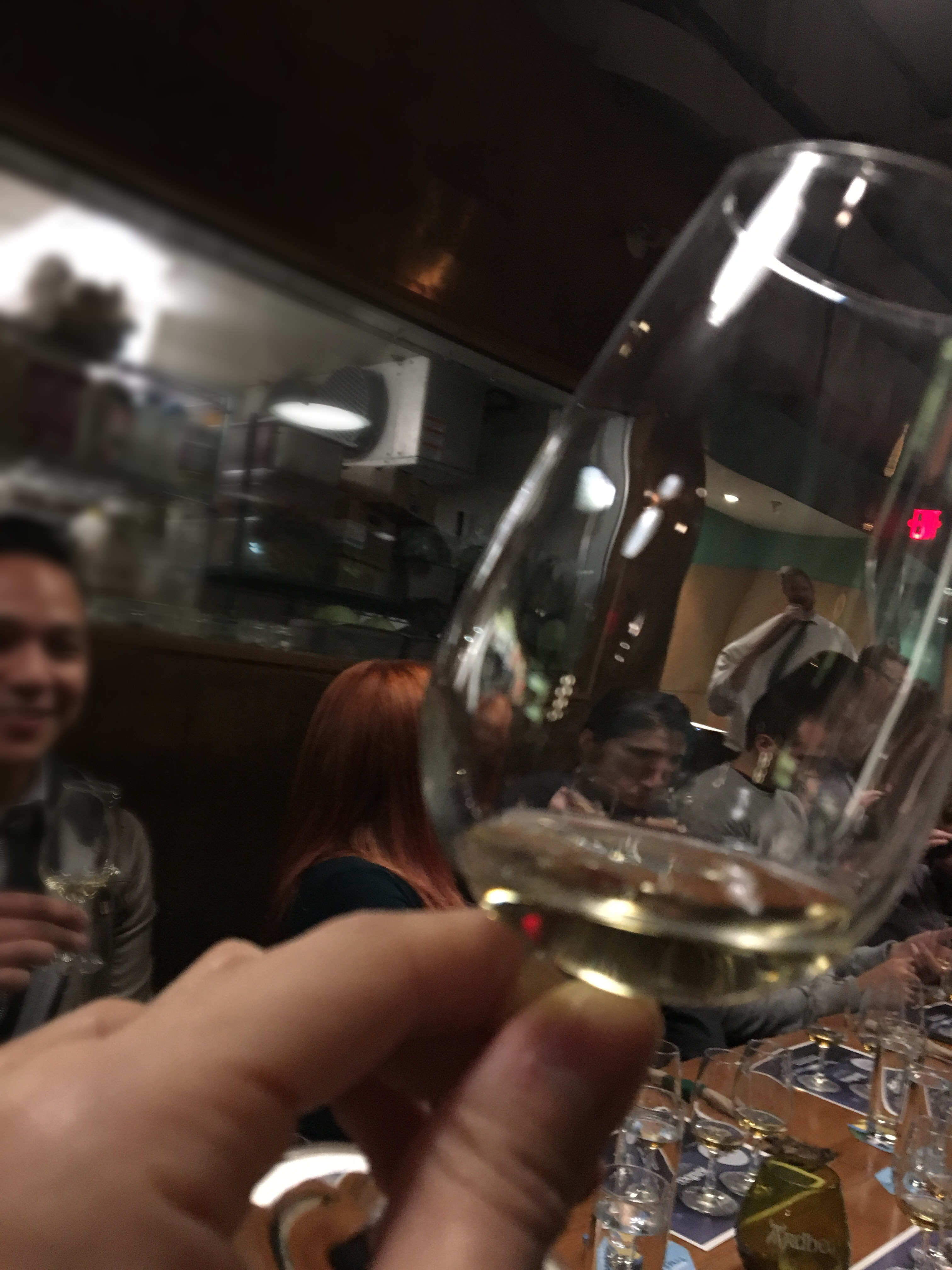 When guests arrived for the dinner, they were given an Ardbeg Old Fashioned, a nice play on the original Old Fashioned which is traditionally made with bourbon or rye. It was lovely, so I made sure to make note of the ingredients they announced so I could share the recipe in their approximate quantities and the method from watching intently as the bartender made ours.

*For more than one cocktail, multiply ingredients accordingly.

Cheers! Slainte mhath! Have a wonderful and safe weekend!

My ticket for this event was provided by Shebeen Whisk(e)y House. A big thank you to them for including me in this dinner and for planning a great event! As always, opinions are my own.

“I should never have switched from Scotch to Martinis.” (Humphrey Bogart)

City Girl Whisky Diary: Where to Get Free Whisky in Scotland

#12DaysofHygge Day 2: The perfect cup of tea in Edinburgh + Tea-to-Go in Vancouver

Hello, I'm Yasmine! Welcome to my blog. I'm a recently transplanted Canadian ex-pat living in England and it's my mission to live life knowing we don't have to spend a fortune or sacrifice wellness to have a fulfilling journey. Ex-pat content is in the works, so stay tuned!

Tea with scones and a book is my current favourite

Happy International Day of Yoga, everyone! Yoga is

One of my favourite things about wine tasting is t

Walking into the weekend in search of of hat pin t

Today is my Dad’s birthday. He would have been 7

Welcome to the Main Gallery at the @fitzmuseum_uk

I was born in Richmond, BC, the traditional and un

After a couple month's pause, and a ridiculous sea

The Clockmaker’s Daughter
by Kate Morton

Meditations from the Mat: Daily Reflections on the Path of Yoga
by Rolf Gates

Soulful Simplicity: How Living with Less Can Lead to So Much More
by Courtney Carver

The Science of Service: The Proven Formula to Drive Customer Loyalty and Stand Out from the Crowd
by Mark Colgate